So I learned what 2 consecutive days of cyclocross racing feels like.

A demonstration of discipline and tolerance to pain.

Thank goodness for day light saving time, because in theory, it gave me an extra hour of sleep.  Unfortunately, a text message at 4:44am from someone in an airport that I did want to hear from changed any plans I had for extra rest.  I had napped after Saturday’s race so I was rested enough, and I actually arrived at Look Park earlier than necessary.  As a result, I was able to preride the course and see the changes they had made after day 1.  Yes, they change things up in these 2 day events–it keeps racers on their toes. Because ‘cross is already hard, but let’s keep ’em guessing too.  That’s just how the sport rolls.

Major changes included the run up and the descent.  The run up was a short uphill (rideable) and hairpin turn, then another hairpin, dismount, run-up to the upper deck.  The decent was a very sharp downhill followed by an immediate right turn which claimed a few riders (crashes).

I was very sore from my efforts on Saturday and I didn’t feel like a had a lot to offer, so I kept me expectations reasonable.  The field was a bit larger at 75 racers.  We lined up the start and I tried the concentrate on just having a good race, despite my beaten body.  The whistle blew.  I had a terrible start.  The rider in front of me staggered, so it forced me to as well.  Then I couldn’t clip in immediately.  Another rider in front of me choked on the first corner and I was caught behind her, so I choked with her.  I needed to stay out of trouble, and it was everywhere.  On the first hairpin turn before the big run up, the barrier tape had collapsed and created havoc–we were all forced to dismount and shoulder the bike while lifting the tape out-of-the-way so we could pass one at a time.  Major time suck!  This is why starts are so important.  When things fall apart in the back, you don’t get dragged down with it.

This isn’t an accusation either–this just happens.  It’s like one small thing causes a chain reaction and then the rest of the field is affected.  This is just how it is.  Being fast gets you a better starting position.  Being fast allows you to be faster.  Good starts are everything, and this was a great example of why.

After that most of the trouble had cleared.  I felt a bit empty but pushed it anyway.  I battled a couple of women but lost often.  I just tried to have as good a day on the bike.  My muscles were torn up and didn’t have the push they did on Saturday.  I did the best I could.

Which ended up being not as bad as I feared.  I finished 55th of 75 riders–still solid and in keeping with my results on Saturday.

My next goal is to crack the 40’s on a race of similar size (any in the NEPCX Series).  I don’t think it will happen this season but something to work towards next season.

If you’d like to see what the course looked like, please look at this extremely excellent video by CyclingDirt of the pro men racing on Day 2.  Note: this is same course used as the rest of the racers in amateur classes.  The video really captures the course layout–very good stuff.

And here are some shots of the Cat 4 Men on Day 2 hitting the barriers. 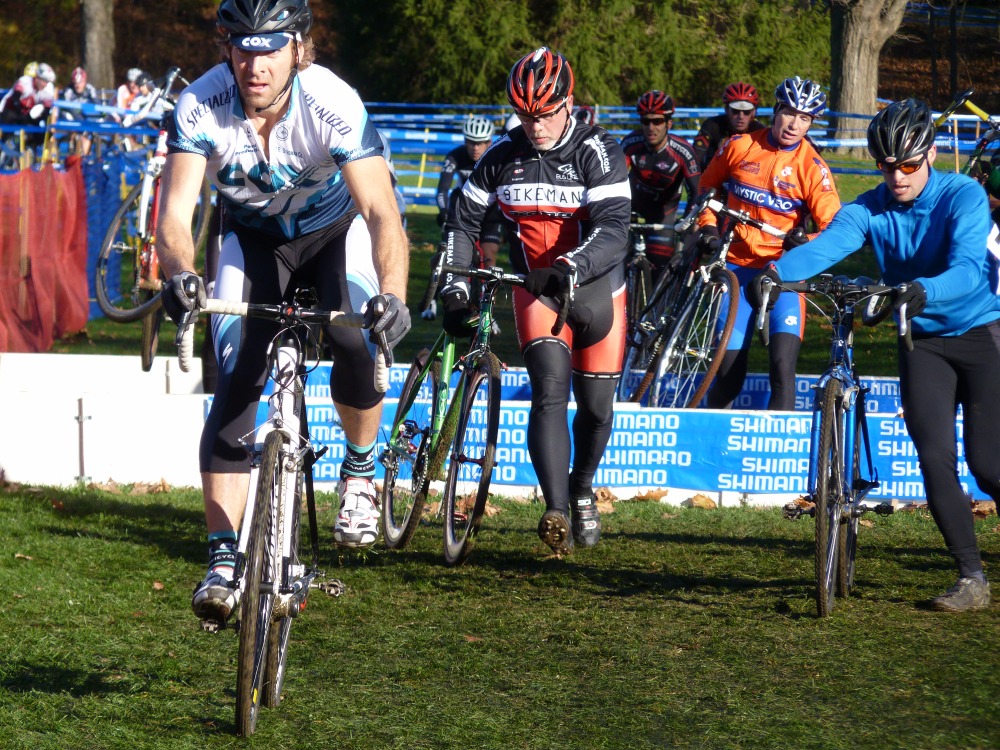 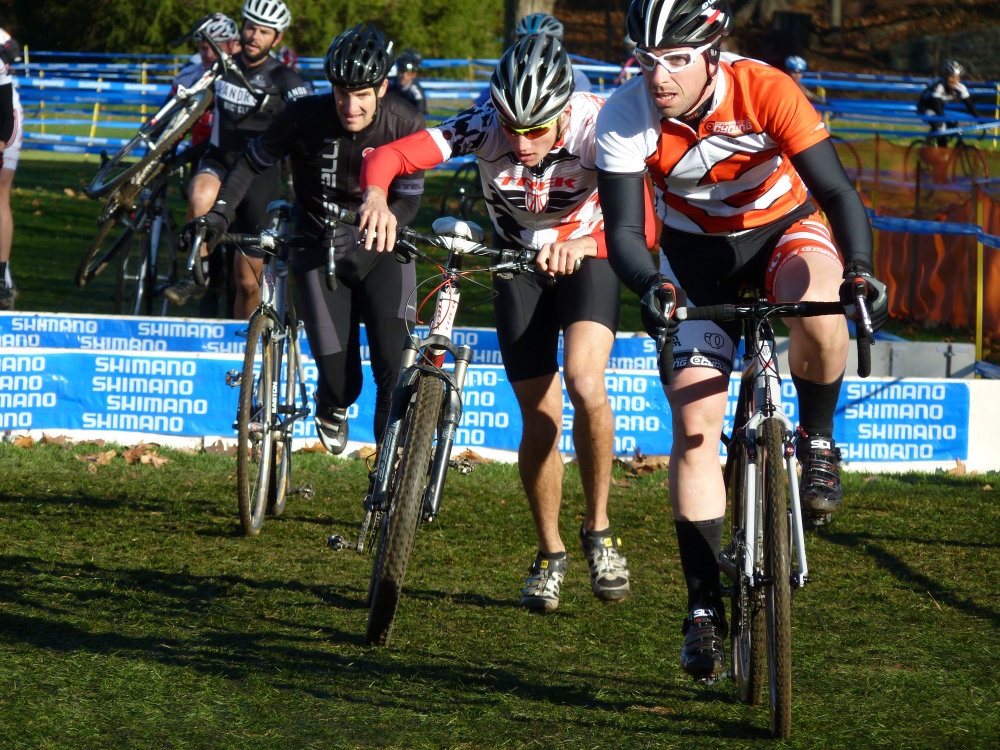 I don’t want this to be the end of my season.  I would like to do at least 1 more race, a smaller one that I’m healthy for.  I am head over heels for ‘cross (figuratively, fortunately–although the literal version is completely possible when doing the sport).  It’s fun and hard and amazing and hurts but in a way that makes you feel so alive–it’s hard to explain to people.  I’m clearly addicted.  I don’t care if I suck.  That’s not what it’s about.  I’m not sure I can put into words what this is about, but I’ll keep doing it until I figure it out.  Then I write about it here.  Then I’ll do it some more.