I arrived at about 8:30AM, and hustled down to the finish line where a bunch of other racers where hanging out, waiting for the men’s Cat 4 to finish. The course opened for inspection shortly after the winner finished and a large group of us entered the course. I took it slowly, and did one entire lap around trying to take in the best lines and hazards to avoid.

After my pre-ride, I registered and headed back to the car to get my number fastened. Then I went straight to the staging area for the start, where other Cat 3/4 women were gathering. Call up started and I was placed in the back (rightly so). There were almost 100 riders in the field. We heard instructions and the whistle blew.

I had a good start, and a great first lap. The course was fast with some tricky spots and riders were getting caught off-guard by some of the technical areas. I passed several riders on the first lap and missed at least three minor calamities which allowed me to slip through the field. I was in a large group of women for the first lap, holding my own.

Then the first significant straight, flat section came. Three women ticked by me. Then another. Back into the woods.

More chaos. I was stronger in these technical sections and knew when to dismount and run because I had the pre ride mapped in my brain. But I was already feeling fatigued. Cyclocross is such an all out effort from start to finish. A little cat and mouse with various riders on lap 2. Then another straightaway. And they dropped me like a hot potato. At least 10 or 12 women picked me off. Now the field had thinned, since a good deal of the racers were in front of me. I had more room now but there were still riders in front and behind me. I tried to be efficient in the off camber sections, the run ups, my remounts. I tried to get in larger gears on the flats, but I was tired. 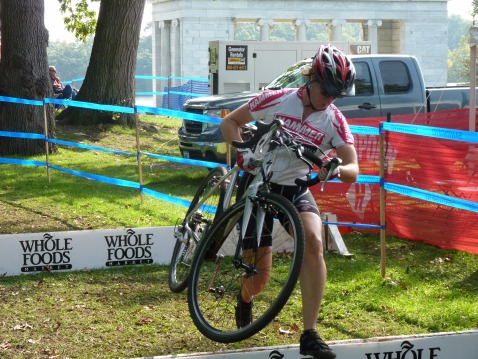 Barriers have become the least of my worries. Speed, on the other hand….

On the last lap I was pretty much alone. I passed one women splayed on the ground, tangled in barrier tape with medics attending to her. I lapped one rider who I recognized from the start line. I tried to just spin forward with my last efforts through the last lap, and rally on the pavement toward the finish line. Everyone’s places were pretty much secured by this time. It was just a matter of finishing.

I finished 63rd out of nearly 100 starters. I was not lapped. Only 76 riders finished the race.  Considering this was my second race and the field was at least 50% Cat 3 racers, I feel pretty good about this result.

I had a great time at the Providence Cyclocross Festival. I was a bit nervous to race a venue so big for my second ‘cross race ever but I spent a long of time watching videos from previous years and that helped me feel more comfortable leading up to the event. The day was warm and sunny, and the course was a bit muddy and dug up but mostly fast with some dicey spots. The flyover was a blast and easy to get up and down, and spectators loved it.

I didn’t race day 2, when the rains came in and made it a wilder ride. I’m hopeful I get one race this season that is a muddy disaster. I think it will make the experience complete.

Who’s Not Out Riding